Please message the shop owner for order details.
Description
Shipping & Payment
Customer Reviews
Description
LENGTH 82mm
WEIGHT 18g
TYPE Floating
HOOK Front and Rear: Cultiva SD-36 #1
Catfish game only
Jointed crawler type
Realized crawling action that can be traced even in areas with fast current, and pursued light pulling feeling
Jointed structure to cope with catfish that often miss bites Improved hooking rate to the tail hook
The rattle ball sound in the front and rear body, the unique knocking sound caused by the interference of the front and rear bodies, and the slapping sound of the wings on the surface of the water are three different sounds that motivate the catfish.
The luminescent body, which is inserted diagonally near the back of the head, has a highly exposed mounting method. 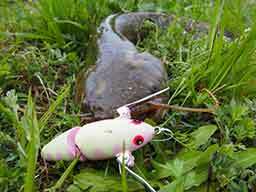 Advantages of jointed structure
The main reason why Jitler has adopted a jointed structure is to improve the hooking rate.
The jointed structure allows the rear body to hang down below the surface of the water when paused and prevents the tail hook from swinging from side to side when in action, thus improving the hooking rate.
The joint structure is based on a single point support system. The joint structure is based on a single point support system, which was the most successful in swim tests, and the cut shape of the joint surface.
Action
Based on a crawling action in which the lure swims as if it were gouging deeply while hitting the surface of the water with its wings. This action is inherited from the well known action of the Batapee, and is effective in wavy conditions where cup type plugs are not good.
Like the Batapee, it is designed to have a large roll angle so that the wing can grab the water more deeply and hit the water firmly at the same time, even in wavy conditions caused by wind and current changes.
Appealing with three different sounds
The Jitler turns on the motivation of catfish by generating three different sounds simultaneously.
1. The sound of metal rattle balls inserted into the front and rear bodies, "kara-kara/jara-jara".
2. The knocking sound of the front and rear bodies interfering with each other.
3. The "thump-thump" sound of the wings hitting the water surface.
Please try the overwhelming effect of the sound appeal that is unparalleled.
High visibility
The lure is installed diagonally near the back of the head to expose the luminous element.
This method provides the highest visibility at points where long casts are required, in pitch-dark areas with no light at all, or in areas with a lot of light.
The thickness of the Chemi Firefly may differ slightly from left to right. If it is difficult to get in on either side, insert it again from the other side. 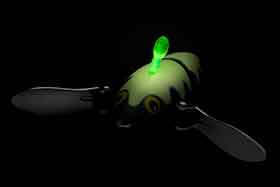