Please message the shop owner for order details.
Description
Shipping & Payment
Customer Reviews
Description
"Mountain stream bait finesse" style advocated by Hiroyuki Motoyama.
We pursued the ability to cast lightweight lures such as spinners without feeling discomfort or fear of trouble. And I sought the ideal action that can comfortably operate even the heavy sinking minnow that has been frequently used in recent years.
List of specifications
■ BST-HM has 2 pieces, BST-EXS has irregular 3 pieces
■ The blank is made of carbon and has an unsanded finish
■ Guide: All models are equipped with Fuji Titanium frame SIC guide. Small diameter original setting
What is mountain stream bait finesse?
With the establishment of the bait finesse style that originated in bass fishing, the exclusive bait reel has evolved dramatically. With the ability to cast lightweight lures in a trouble-free manner, which was unattainable with bait reels up until now, and with high gears, we have obtained a retrieve speed comparable to spinning reels.
Dramatic improvement in accuracy performance that bait tackle enables. And bait reel has super low casting ballistic. As a result, we have achieved a soft presentation that is not wary of even highly alert river fish. Of course, as a result, it will be linked to the fishing result.
"Mountain stream bait finesse" that dramatically improves the style of mountain stream lure fishing. Not to mention those who are aiming for the evolution of their own mountain stream lure fishing, those who have frustrated their bait reels and anglers who have not used bait tackles yet should have it.
Feature
Action pursuing usability at mountain stream bait finesse
The BST series is a UL power moderate taper. Tip section where you can feel the weight of the lure even when casting a light lure. In addition, the release point at the time of casting can be easily grasped, and the sinking minnow twitch has a tapered design that makes it light and stress-free.
Highly visible color thread & site top that visibility is also a weapon
In bait tackle, the release point during casting is located behind the spinning tackle, making it difficult for anglers to see. Especially if it becomes a dim mountain stream where the light is blocked by trees. Therefore, by adopting the “High-Visible Color Thread Sight Top”, threads with high visibility come into view gradually, making it easier for beginners to grasp the timing of casting.
The site top, which uses a blank collar with high visibility, promotes more accurate rod work by visually confirming the state of regular reciprocating movement without the tip moving violently when twitching. The site top has the effect of correcting the blur and habit of rod operation. 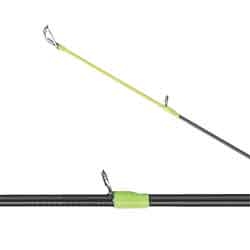 Blank: Lightweight blanks that have been trimmed of waste. The tip part is the site top that emphasizes visibility.

Scale marker: The distance between the marker spot on the butt end and the marker wrap on the blank is 30 cm. It is a standard for simple fish length measurement (adopted for BST-EXS model). 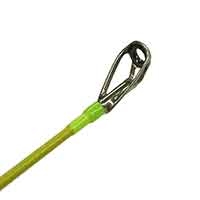 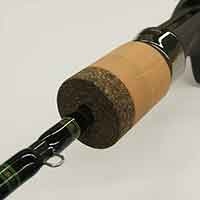 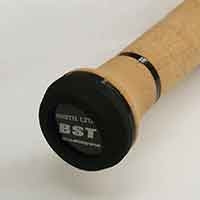 Equipped with a hook keeper that supports movement with the hook set.
The front grip is a high rubber rubber cork that prevents chipping.
The end cap is a hard-strength EVA that won't slip even if you lean the rod against a rock. Protects the center laser engraved metal ring from scratches.
Shipping & Payment