Please message the shop owner for order details.
Description
Shipping & Payment
Description
LENGTH 2.2inch
WEIGHT about 3.1g
Compatible hook size offset # 2-3
* It depends on the hook shape, so please use it as a guide.
PACK 6 pieces
Sinking Insect Bait that never misses a chance
Sink spider
A formidable approach to the bass. A vigilant opponent must decide in one shot and do not use his mouth.
Make sure to sink in the target place in a situation where failure is not allowed. Not only the skill of the angler, but also the performance of the worm is required.
The sink spider can be dropped "straight" or "horizontally" at the target location.
It is a sinking insect bait to eliminate mistakes as much as possible in site fishing where the success of the approach is a prerequisite.
Requirements for not missing a chance
Site fishing for visible buses that do not use the mouth easily. Regardless of whether you can bring it to a bite, it is very important that you can sink it properly in the target place and that your fall posture is stable. This is because worms that cannot be dropped to the target position not only cause stress in site fishing, but also vigilant fish do not use their mouths after repeated approach mistakes. The same is true for worms that fall in an unnatural posture.
・ The sink spider sinks straight. It does not slide down sideways or back and forth.
・ The sink spider sinks in a stable horizontal position (except when using mass burrs).
Therefore, the worm can be dropped exactly at the target position.
Designed for submersion
The sink spider, which is supposed to sink, has 12 legs arranged in multiple directions. By reducing the density of the legs, surface tension is not generated and it does not prevent subsidence. High specific gravity salt-in material is used for the material. Even if you don't put in a nail sinker, the worm will sink obediently.
It is possible to speedily aim at fast-paced fish that move along the shore. You can also aim fish that are moving from shallow to deep.
It can also be used not only for site fishing but also for no sinker fishing that shoots along the shore. The straight sinking property of the sink spider allows it to tightly attack vertical structures such as vertical bedrock and single stakes.
Self-levelizer function
Instead of relying solely on the weight of the offset hook, the sink spider itself has a "self-levelizer function" that maintains a horizontal posture on its own. This is not achieved by adjusting the specific gravity of the main body, but by the direction of the legs extending from multiple directions and the rectifying effect when the water flow passes through the gap. You can see the effect by submerging the sink spider alone in a water tank without sticking the hook. No matter what position you try to sink, you can quickly return to a horizontal position.
Insect-shaped worms often achieve a horizontal position due to the weight of the offset hook, but the sink spider has its own performance. It means that the potential is high and the stability is high. 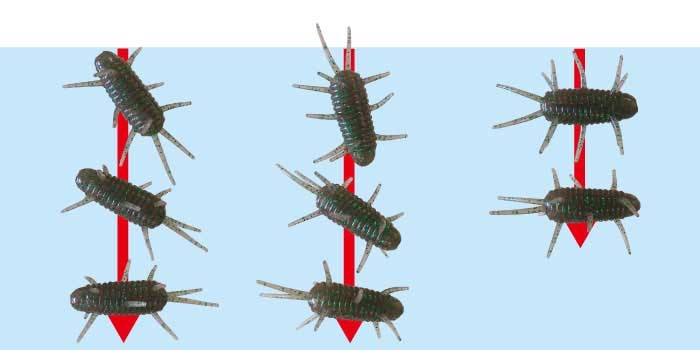